Senior, Madalyn Lobmeyer’s  essay on the topic “Is Optimism the Key to Achieving the Dreams you iMagine?”  won the overall 2020 NE District Essay Contest.  For her efforts she received a medal, a certificate, and a $2500 scholarship from Optimist International.  She is the daughter of Jonathan and Amy Lobmeyer of Seward. Other state finalists were SHS seniors Garrett Erickson and Cordell Vrbka, both qualifying and representing other Optimist Clubs with their essays.   Garrett Erickson is the son of Scott and Brenda Erickson, and Cordell is the son of John and Becky Cordell.  There were 18 state finalists in the Nebraska contest and their essays were evaluated virtually by a panel of three judges in the contest.

“We are very proud of Madalyn and she is a special person to our Optimist Club!” stated Seward Optimist Essay Chair, Clark Kolterman.  “This is the first time a student from Seward has won the state essay contest and it is very rare that the same student wins both the Optimist Speech and Optimist Essay contests sponsored by the Nebraska Optimists!  She has a total of $5000 in Optimist International Scholarships as a result of her hard work and insight and we wish her well with her college career!” 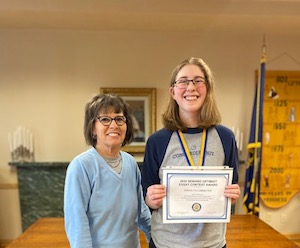 The Essay Contest is sponsored by Optimist International to give young people the opportunity to write about their own opinions regarding the world in which they live.  In additional to developing skills for written expression, participants also have the opportunity to win a college scholarship!  The Seward Optimist Club has participated for many years.